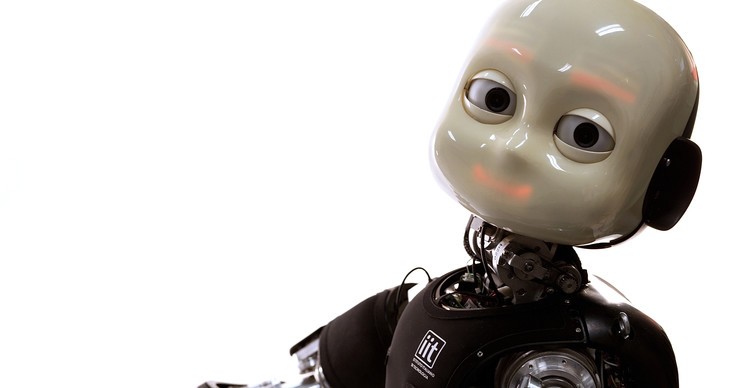 The iCub project was born in 2004 owing to the idea of Giorgio Metta, Giulio Sandini and David Vernon to develop a platform to support research in embodied artificial intelligence.

The financial support arrived through one of the first IP projects funded by the EU Commission under the 6th Framework Programme: the RobotCub project. RobotCub effectively started on September 1st, 2004 and ran for 65 months. RobotCub had three main goals reflecting the design of the iCub robot, its diffusion as an open platform (in the sense of Open Source), and the implementation of a number of basic cognitive skills. At the end of the project in 2010, our expectations were surpassed by reality. We had built at least 15 robots for various laboratories worldwide, raised the interest of open source robotics and successfully led the integration of a large set of skills in a common software repository.

The iCub design, a community work, took only about three and a half years, and it is the only platform to date which can claim enough generality to be used for studying crawling and walking, vision, touch, AI, cognition, manipulation and learning, in the shape of an easy-to-use small humanoid that can be operated in any laboratory without any special equipment. The iCub has 53 degrees of freedom with the majority in the upper body and 9 in each hand. The iCub sensors include cameras, microphones, force/torque sensors, a full body skin, gyros and accelerometers and encoders in every joint. We designed the iCub controllers to be programmable and its software system as a state-of-the-art middlleware called YARP. The iCub project pioneered ideas that were later "copied" worldwide: e.g. our middleware YARP dates back to 2002.

In 2007, IIT entered the iCub project which added to the momentum by allowing the construction of a fully equipped laboratory for the iCub research (the iCub Project). IIT provided a quantum leap in the project ability to deploy the iCub effectively incorporating industry-grade development techniques that a standard research project rarely can have access to: these include man power, skilled engineers, support personnel to name a few. In 2008, another EU project (ITALK) called for the construction of four additional iCub. In 2009 the same happened for the ImClever EU project. The project RoboSKIN more recently allowed the development of the unique whole-body iCub skin system (completed in 2012). Several other iCubs and components were realized in the same period peaking in 2017 to 36 units.

A number of exploratory advancement of the iCub were also developed at IIT starting in 2009 and, in particular, series-elastic actuators, neuromorphic cameras, better legs, various revisions of the hands, battery, Wi-Fi connectivity. Outcomes from these studies were incorporated into subsequent releases of the iCub culminating with iCub 3.0. In 2015, we started the R1 project, an attempt to lower the cost of humanoid robots by replacing CNC-machined metal with plastics, carbon fiber and sheet metal parts.

The current research and development directions of the iCub team can be explored on this website and the connected community page.